It will not have escaped the notice of residents, (especially those who live nearby), that work continues relentlessly at the Hub as Wills Bros. struggles to catch up with the project timetable.

The Parish Council was consulted on the two applications to increase the working hours and made the following comments on each one:

“RESOLVED – that St Erth Parish Council objects strongly to these applications because the extended working hours applied for:

1. are being worked already and so this breach of planning control should be the subject of enforcement action (and the Parish Council will be making such a complaint);
2. are considered unneighbourly because if approved, will prevent the owners/occupiers of neighbouring properties from having the quiet and peaceful enjoyment of their homes, especially during the summer months;
3. will create an increase in construction traffic movements in that area in addition to the general increase in summer time traffic, especially during the school summer holidays, and when there is greater use of the recycling centre.

St Erth Parish Council, therefore, requests that this application be refused and that work continues during the hours previously permitted, but that if the Case Officer is minded to approve this application under delegated powers, then it be referred to Committee for determination.”

The point has been made to Cornwall Council that it is currently allowing Wills Bros. to continue to work outside permitted hours but will not take enforcement action against that breach of planning permission (because permission has been applied for retrospectively) – although Cornwall Council has not yet determined either application! 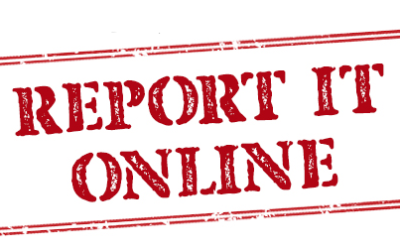 Following all the recent rain and issues on the roads, just a reminder to everyone that the areas the Parish Council is responsible for include the play parks, cemetery, allotments, public toilets, cutting designated public foot paths (list of paths that the PC cut... 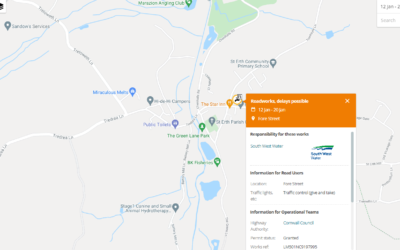 Please note that South West Water will be working in Fore Street as above.  The road will remain open with traffic control operating which could lead to delays. 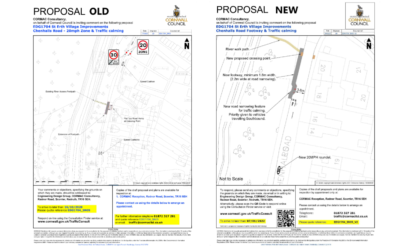 Cormac Solutions, on behalf of Cornwall Council, is inviting comment on updated proposals to extend the footway on Chenhalls Road which have been revised from the previous consultation. The aim is to create a pinch point, or build-out, to help maintain slow speeds on...